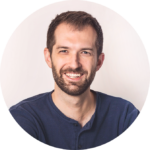 Last year, a few colleagues at Artefact implored me to run a game of Dungeons and Dragons (D&D) for them, as none of them had played before. Though I played for years in college, I had never facilitated a game and was excited to give it a shot. Having rediscovered the hobby now as a professional, I realize that playing D&D has made me a better designer – not only because it allows me to develop related skills and flex creative muscles outside of the constraints of day-to-day professional work, but because it often reminds me of key philosophies and mindsets of design that are otherwise easy to forget.

“You disembark at the coastal city of Silverport just as the sun sets below the horizon. Hundreds of sky lanterns hover just above the city, illuminating the white stone buildings in a soft, warm glow. You’ve apparently arrived during some kind of festival; a fellow passenger complains out loud that it’ll be impossible to find any room at the inn with such festivities happening. What do you do after stepping off the ship?”

Dungeons and Dragons is a pen and paper roleplaying game where people play fantasy characters like elvish wizards and dwarven barbarians, fighting monsters to get loot and become more powerful. It’s similar to a board game in that it’s typically played around a table using dice and other paraphernalia, but unlike most board games where rules narrowly define a few actions you can take during your turn, playing D&D is more like being an actor in an improvised play where your options are open-ended. In this way, D&D can be thought of as structured collaborative storytelling.

One person – referred to as the dungeon master (DM) or game master (GM) – facilitates the game by describing an imaginary world, while the rest of the players each take the role of a single character within that world. In the course of the game/story, the DM describes situations that the other players find themselves in, and the rest of the players describe what their characters do in response.

That’s the role I took on for my friends – creating a world and facilitating their adventures within it. It’s a lot of work, but taking on the mantle of DM has helped me become a better communicator and facilitator in a design context. As a DM you have to plan and create materials for each session that provide enough structure to be prepared, but flexible enough to accommodate the many different ways the game can play out. You have to manage different players’ inputs, making sure everyone is heard and invested in the experience. And you have to think on your feet to manage the extreme unpredictability of each session.

Leading a group along a collaborative, sometimes chaotic journey of creation deeply parallels the skills needed to successfully facilitate workshops with users, clients, and other stakeholders. Each session of D&D may as well be another workshop under my belt.

Player 1, the warrior: “We should just kill the bandit leader and collect the bounty!”

Player 2, the priest: “No, my character believes everyone deserves a chance at redemption. Let’s find another way.”

One of the first things a player does in D&D is create a character sheet that describes not only their character’s name, skills, and abilities, but also their behavioral traits, flaws, and goals. Do they respect the law or do they play by their own rules? Are they selfless or on a personal quest? Are they well-connected or a loner?

Playing a character isn’t just doing whatever it takes to win the game, it’s acting how one’s character would behave in a given situation, and sometimes that means doing something risky, costly, or self-defeating. You have to consider their values, their motivations, and their overall understanding of a situation (or lack thereof).

Designers often talk about building empathy for their users, which typically amounts to doing some user research to better understand their needs or soliciting feedback. But empathy is more than an intellectual understanding of someone else’s preferences. Empathy is a degree of emotional understanding, feeling the way someone else does and understanding why they think and act the way they do.

Building empathy for users is a serious subject and of course a game is not sufficient on its own to fostering a consistently empathetic mindset. Yet empathy is one of the most important – and difficult to achieve – skills that a designer can have. Spending weeks, months, or years playing the role of people very different from yourself is good practice for when you are seeking to empathize with, not just understand, your users.

“You have discovered the scroll of cat summoning. When you read its incantation, a normal house cat appears at your feet. If the cat is lost or killed, reading the incantation will summon the same cat back at your feet.”

In the game I ran for my colleagues, I designed a magical “scroll of cat summoning” as a fun little item for one of my players who loved cats. I thought that giving them a pet in the game that could never be lost could offer some nice narrative flourish. But what I didn’t expect was the party’s immediate response upon discovering the scroll:

“Great! We have an unlimited supply of meat whenever we travel!”

Had I stopped to think like an adventurer who would face the challenges of foraging and hunting for food on long, harrowing journeys, perhaps I would have realized my mistake.

Ready for your quest?

Each session of D&D is a designed experience, borne out of research and planning, supported by crafted materials, and played out with all of the unpredictability people are known for. Much like how speculative design is an exercise in exploring a subject free from constraints like budget, client needs, or technical feasibility, D&D is an opportunity to flex a variety of design skills in a fun, engaging way that may not always be possible in the context of day-to-day tasks.

Given the surge in popularity of D&D in the last few years, I’d be willing to bet most designers know someone in their office or class who could run a game with them. I encourage you to embark on your own quest and see what experiences and new skills you discover along the way!

VR Changes How We Think. Now What?